Now, usually I’m one of those people who take down the Christmas tree New Year’s weekend.  However, this year, for a number of reasons it has remained in our living room until Friday morning when our Ninja cat Haley decided it was ready to come down.  I like to think that all who live under our roof are independent, pro-active and helpful.  Well, at 5:45 a.m., Ninja cat Haley, started her independent, pro-active and helpful  disassembly of the ill-fated Christmas tree.

Thankfully, I was up however dogs, husband and daughter were all nestled snug in their beds with visions of who knows what in their heads.  I’m sure it wasn’t a vision of the Christmas tree crashing down.

Somehow I missed “Timber” before the loud crash.  I sprang from my chair to see what was the matter and there it was, our beautiful artificial tree looking helpless as if to say “I’ve fallen and I can’t get up” to a vast and cold tile floor.  Buried under its limbs and strewn across the floor were ornaments, some of which didn’t make it, others that could be salvaged.  Then, from under the tree, there was running water.  Not just any running water, glittery water.  My poor tree was weeping or so it seemed.  For when it fell over, it not only broke a tree leg, a few snow globe ornaments had ruptured.  For a moment, it looked as though the tile floor was a shiny, glittery, frozen pond.  I was waiting for our dog Bubba to come over and start helping by licking glitter water off the floor.  Thankfully, he was shell shocked by what he was witnessing.  He and our other dog Penny had come out to see what happened but backed out to say “it wasn’t us.”

Then, as we were taking the lights and arms off the tree, Ninja cat Haley decided to make an appearance from where she had been hiding behind the couch.  She looked proud and I think somehow she knew exactly what she had done.

So, there we were at 5:45 a.m., my husband and me…taking down the Christmas tree.  As he held the tree up, I dashed around to pluck ornaments off the tree.  Then, row by row, the limbs and lights came off and we laughed and reminisced along the way.  Pretty soon, there it was, a naked pole.  We were done, in record time…it was only 6:00 a.m.

“Here kitty, kitty,” I softly let out.  I wanted to congratulate and thank Ninja cat Haley.  In an instant, she had done, what I hadn’t accomplished in two weeks…taking down the Christmas tree.  Perhaps she can help with other housekeeping chores I thought.  Nahhh, she’s done her work and it’s off for her morning nap. 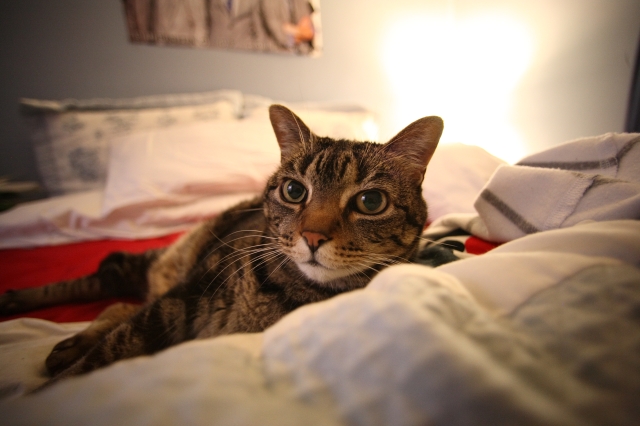 My Husband Frank and Me

Capturing the seemingly insignificant happenings in life that hide among our daily to-do lists and busy schedules then reappear as delightful moments: to teach, to remember, to enlighten, to engage.